a hectic night in the house – Boo’s made travels and has a) succeeded in her tasks, and b) realized damn, durhamtown isn’t the most refreshing of environs during the pre-summer blitz. yay heat!

I’ve paid too much/not enough attention to the hellscape that is our patriotic country of the free, of the brave. what the fuck is wrong with us? gah

progress is supposed to be the goal – Star Trek and shit, right?
Star Wars was the far more romantic adventure – who knows if the good guys win?
what will my kiddo think? how to describe how I raged at the machine, but didn’t really see a way to get out of my comfort zone and you know, what ever I do isn’t going to be enough, ’cause the Man, man. So  you see – that’s why I witnessed the summer of our discontent.

I’m playing a wonderful collection of tunes from my “other” Google Play Music playlists – so many songs, so many choices, so much good – I hope a certain tiny perfect toddler will enjoy the good music I play for him!

so I listen (now) to Johnny singing a cover of One.
I try to figure out how to rage against the machine in a way that might possibly save the children from the hell on earth known as American Southwest. How do you fight the devil himself?
especially if you’re not an angel?

I truly believe the Large Hadron Collider might have caused a few issues.

growth and construction and progress – but what happens when you leave people behind?
why would you do that? 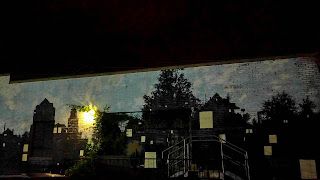 Oh – the last picture – the ‘backside’ of Manbites. Probably was thinking about how time goes on, cycles of open, running, closing, gone – probably was hunting a pic of the closed OpenFist theater to reflect.

Perhaps a benefit of the weasels at the gate is that I ruminate a bit less (slightly) while being whisked along the path of time travel known as my life. so that’s good right?