and just how are you, my little sweltering bowl of hot hot hotness?? good? great … though have to say, I can glance to the bottom of my calendar here at work and see ‘september’ which if I recall correctly is greek for ‘holy hell that was a hot hot summer’ … I think.

Heading into work today, rolled past these guys… 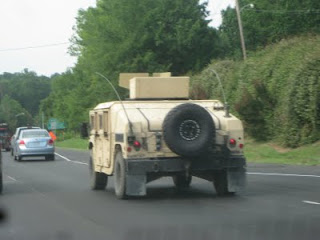 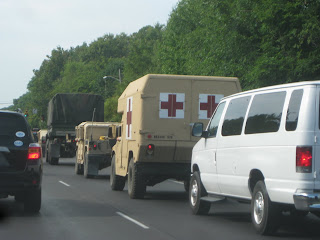 got to thinking … wow – can’t really complain about anything – my job, the heat, nothing… also got to wondering – remember how in the late 70’s and throughout the 80s we had some ‘post-‘Nam’ cinema – classics like Rambo, unknowns like ‘Ruckus’, and even worse ones I recall watching on Saturday afternoons on HBO in Upstate… couldn’t tell you a title if I had to.

I recall all this frenzied urgent angry depictions of Vietnam era veterans. Billy Jack. Most every Chuck Norris character up until Walker … any character that needed an edge had ex-military time in the jungles of Southeast Asia. Most everyone on Magnum P.I., right?

There was this sense that we had done bad by the returning vets – that even though the US government’s actions in the war/conflict were despicable, treating the vets as badly as they were treated was wrong. From that mindset came the memorial in DC on The Mall. From that memorial came books crafted from the letters, notes, and trinkets left at the Wall.

The US forces have had a hell of a fall so far – ups and downs. Worst month in Afghanistan. Even saw video shot at the funeral of a local soldier on the news the other day. But I have to wonder… aren’t we just repeating the shit we did in the mid 70s? Do we treat our vets any better? Is it any different – again? Hell, I’d argue that we have chosen as a country to push them behind the media curtain that BushCo created, and we’re thankful for that.

10 years in, do you know anyone who’s gone ‘over there’? Do you know anyone who’s come back not the same person who left? I don’t – it feels weird and wrong frankly – and I know I’ve posted before about how I want so badly to have done something – anything – to show support for the troops, anger and disdain for the puppet masters – but really, I’ve glided through this shitty time just like everyone else.

Today I saw a small group of military vehicles – the first time I’ve seen ‘up-armored’ HUMVEEs in person. They don’t look comfy – not that Hummer’s are comfortable – but when your window is a 8×8 inch opening blocked by 3 inch thick bullet resistant glass – whoa. Each truck had a full complement of people – humans – Americans – sitting inside, driving along a state highway through Chapel Hill, North Carolina. A six wheeled cargo truck, and a Medic HUMVEE were in the group. A white full size van driven by a uniformed soldier brought up the tail. NC67 chalked onto one of the mudflaps. 10:15 in the morning on a Thursday in august. Where were they going? where did they come from?

Huh – pretty down post – and this after a visit to the Outer Banks for a week of rest and relaxation and friend making … ah the life of Scott.

Ok – pushing this so that I can prove I’m still here – on the web – doing things, making my mark!!
Enjoy the end of summer mi amigos…