though I got to say wow – it’s been a heck of a day.
For those who’ve been paying attention, I was somewhat productive last night – moving furniture around, watching important movies, expressing myself, and laying with my loves.

This AM had it’s rough parts – why is it a multifunction printer is in actuality a schizophrenic machine where it may or may not act as a scanner from time to time? too much time and not enough attention was given, and I jetted to the workspace. lovely lovely day to drive with the windows down…

got to work and thought I’d see if Sprint has answers for my concerns over the not quite ready for prime time release of a software update I have on my phone;

After a great lunch out with Betty and Morgan at Torrero’s, I proceed to the closing scenes of “Scott versus the Volcano of Sprint customer service spewage”, in which I’m near tears, Jay saves the day by setting me up to trade out both Boo & I’s phones to upgrades, with only a moderate bottom line payment. Oh, and of course an extention of our contract terms, and dual bumps on the head with the “$10 Premium Data Fee” – cause OUR data is gonna be prettier and shinier that YOUR non-premium data!! take THAT!!!!

It was / is a very very very long and painful story (how is it at the end of multiple hours I’ve engaged 6 (SIX!!!!) Sprint employees only to be let down repeatedly?)

Check in next week when Boo expresses her displeasure with me due to me yet again causing grief with her phonage! That is until she uses the 4G speeds to watch cool shit on her shiny, new, fast, big-screen phone. Perhaps I’ll be content with a functioning HTC smartphone running Android Froyo ever so nicely!! Hope-timisticly I type these fateful words.

I did have a lovely drive home with the windows down, and then a nice chat with boo (we’ve been walking about our lawn these past two nights – really really nice to be out in our yard). She’s excited about her office being moved and her getting a space of her own in the ‘marketing pit’ as she calls it – I’m excited cause I can shop for fun office stuff to send to her!

I had a Rob Lowe flick on tonight via Netflix streaming – called “For Hire” with Joe Mantegna. Thought it wasn’t too bad – always have enjoyed Rob’s acting.

Then I somehow stumbled upon some Roger Waters music videos on YouTube – apparently, unbeknownst to me, his album Radio K.A.O.S. has a video feature associated with it! Thanks to kind Slovenians I was able to see some of it. That led me to looking for a song or two I didn’t hear on the net in my vast collection of mp3s. No dice – apparently I haven’t ripped that (and as I type this I wonder – do I own the cd??) – but I do have his “Pros & Cons of hitchhiking” in my collection, and thus I was somewhat inspired to start this post due to these lyrics –
“I thought we were safe home in England / sleep sleep I know I’m only dreaming / through closed eyes I see west German skies on the ceiling / I want to get back … I want to be there… see the sun going down behind Krups steam-works … on the outskirts of some German town”

The album also ends oh so abruptly in what can only be referred to as inspired.

Of course – all of these musical cues have me floating half-absent-mindedly in my 20’s in Germany- West Germany (see above) to be exact. White Wolf and all that shit. I’m sure it’s part sleep dep, part feeling much better thank you, but there was something about the time and the place that I can’t dismiss as being super significant ONLY because I was experiencing the world for the first time then and there. Wish I could speak to the bigger truer picture/story – though if I could, would it even matter?

in a moment of clarity – to make sure in the darkness that you’re still there… I had a bit or weakness and I couldn’t take another moment alone.

so on a complete tangent – how do I go about offering to be of any assistance to the veterans coming back from our war zones? do i ring up the uso? the va? seek out a meetup and then say ‘hey – thanks. wanna talk?’ cause – and here’s a little secret – a long time ago, I passionately spoke of a problem that, as a perfectly naive high-school-er, I thought my peers needed to be told of. it was a factoid (who the hell knows where I found it or if it was real) that by 1985 more American soldiers had died at their own hands than had been killed in the war. I had a nice speech with visual aids (ahhh … teacher’s name escapes me, but his nickname was spike, he did theater in clinton for the christmas story annual production… hmmm… Speech was the class – took it twice I recall). All sorts of things wrong as I look back now – really scott, that topic for high schoolers? but at the end of the class, all stern and serious or really what ever I was, a girl mentioned a somber thanks. I can’t recall if perhaps she said her dad, or uncle, or brother – seems to me a family member perhaps had killed themselves, and my speech had touched her emotions. so long ago, so fucked up really. Sure it had to be scary to teenager-Scott then. Terrifying to me now.

Why, 25+ years am I pondering this deep trench of shit? Well, you see, on the way home today, before a touching story of a nun in Mississippi who has a community approach to running a hospital (she calls it ‘whole-istic’ medicine; in trade for a man’s $1,000 bill for his wife’s medicines, the nun asked ‘do you hve a chainsaw? can you use it?’ – he said yes, and the nun got the tires that were around the bases of her Willow tress – put there when they were but saplings to prevent lawn care damage to them – removed. Everybody’s a winner – read the story, listen to the story) was the tragic story of United States Marine Corp veteran Clay Hunt – here’s the link to the NPR All Things Considered story – he had struggled with PTSD after serving in Iraq and Afghanistan, had honorably separated from the service, and had championed the cause of veteran mental health issues in the capital. Somehow, though, it was all too much and he killed himself at the end of March. That story – that fact – has me thinking I want to help, if there’s anyway that I can.

What’s that? You haven’t seen a pic of Blue today? Well, here ya go – 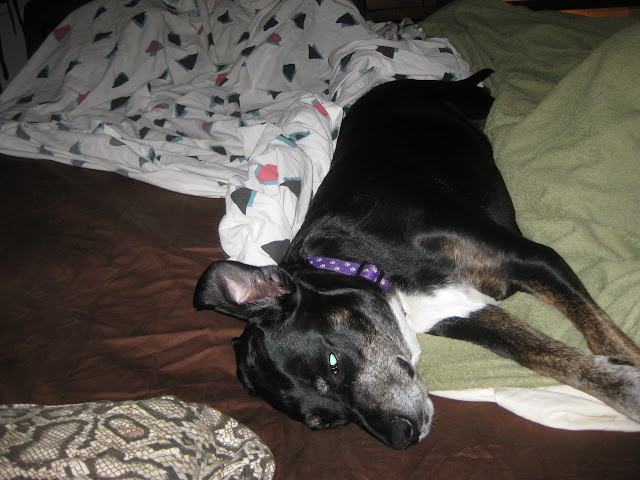