wow – this morning was the most explicit of examples of the power of music I can recall in the recent past.
Started with our local rock show playing Triumph’s ‘Magic Power’ (~1985) followed by Everlast’s ‘What It’s Like’; no more than 20 minutes earlier I was cringing at a video of me karoakying “Venomous Poison” from the other night at Carrie’s.

Wow – and to motivate me to soak up the feeling and write about it – how about some G’n’R – “Sweet Child O’ Mine” – whoa… too many attachments there. Was that Staind’s “Outside” just now – wow… and the Who – Teenage Wasteland?

As I shared with boo, let me share with you the reason I’m so buzzed about music right now.
Let’s jet back to the mid ’80s. The OTHER Canadian power rock trio had released upon the American AOR network the storied “Magic Power” from their album Allied Forces. So smitten was I with the tune and the feelings associated I biked over to Sangertown mall and dropped a hard(ly) earned sawbuck on a new fangled audio format – a so-called ‘Compact Disc’ – who knew how long I’d have a chance to buy Triumph on a shiny plastic disc!!!

Being so jacked over a tune – a 3 and half minute collection of tones and words – it happens less so now, but still with striking clarity – ask me about The Road, Part II, from the Midtown Dickens. but back in the day – it was a weekly occurrence, I’m sure. My experience of picking up things that look interesting to me has helped me out, even if I never got the ‘go see live music’ truth.

Let’s take a moment and compare how music over time has occasionally changed your religion (Dear God, XTC ~ 1988) versus TV shows that have changed your process of understanding life. I’m sure there are good shows that have worked on their own, but as I was thinking about this I realized most of the shows I love have music deeply entwined – from Northern Exposure to Scrubs; from Homicide: Life on the Streets to True Blood – the music kinda makes the good shows great. Burned directly into my cortex is the show Studio 60 – I have no idea how many episodes they made, but the one I saw, the one that had that awesome rendition of Silent Night – and thus I recall it cause of the music…

How about those awesome CSI theme songs – no – wait – that’s the Who being AWESOME!!!

Ok, wanted to get this to the printed screen, if at least in this limited understandable way.

hey – wanna see a pic of my cute cute cute pup??
aren’t you a lucky peep – 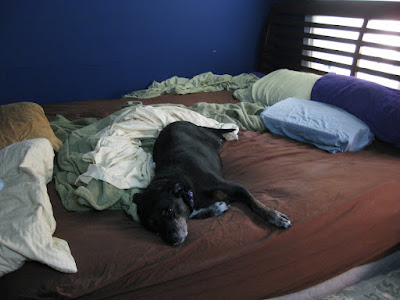